The wheel of time - Happiness Academy


"Time present and time past

Are both perhaps present in time future.

And time future contained in time past. "

It has been suggested that the linear theory of time is related to the experience of time in the Northern (and Southern) hemispheres, where it is marked by seasonal changes: life begins in the spring, matures in the summer, and dies in the fall, to begin a new cycle the following spring. Bali, however, lies in the region of tropical rain forests near the Equator where there are no reasons to synchronize the growth schedules of all livings things. Instead, the processes of growth and decay proceed at different rates all over the forest, all the time. A flower is on a short, rapid growth cycle; a tree, a much longer one; a rock, longer still. The cycles mesh in this world, the Middle World, to create life.

Balinese calendars reflect this experience of time. According to the Balinese theory, each living being moves on its own time scheme, and events occur when these touch, when things or creatures interact with one another. This is somewhat like our concept of Friday the thirteenth: when Friday of the week cycle intersects the thirteenth day of the month cycle, the day has a particular quality—dangerous or unlucky—determined by the conjunction of the two. The calendar depicts each of the thirty-five possible intersections of a five-day with a seven-day cycle, and shows pictorially the qualities which these intersections have.

This view of time gives rise to a social world where concepts of time as applied to human life—the process of aging—differs enormously from that of the West. For example, the date of someone’s birth—the particular conjunction of cycles of several different-sized weeks—is of great importance since it defines the qualities time had when he or she re-entered the Middle World. But this birth-date is not used to determine one’s age. Age as such—age in years—is irrelevant to this concept of time, and Balinese usually do not know how “old” they are in years—although this could be calculated.

Death is seen not as an ending, but a movement out of the Middle World into some space in the baroque Balinese Heaven, from which one will emerge eventually into the Middle World to play another role. The doctrine of karma decrees that one’s station in the Middle World will eventually rise or fall according to one’s actions in former lives, but the wheels of karma turn very slowly, and in practice most Balinese believe that almost everyone is reborn into his own line of descent.

The very young and the very old are closest to the unseen worlds and hence to a state of purity and detachment from this world. As a child grows up, he becomes attached to the Middle World in order to become an effective actor in it, but in later life he should begin to withdraw so as to prepare for his transition to a higher level of existence. High priests are usually elderly couples, who often undergo their own funerals before beginning a new career as priests, striving for a detachment from human life so complete that they are utterly unaffected by events such as the death of their own children.

These beliefs about time and the process of aging have an effect on life in Bali which goes far beyond religious belief. 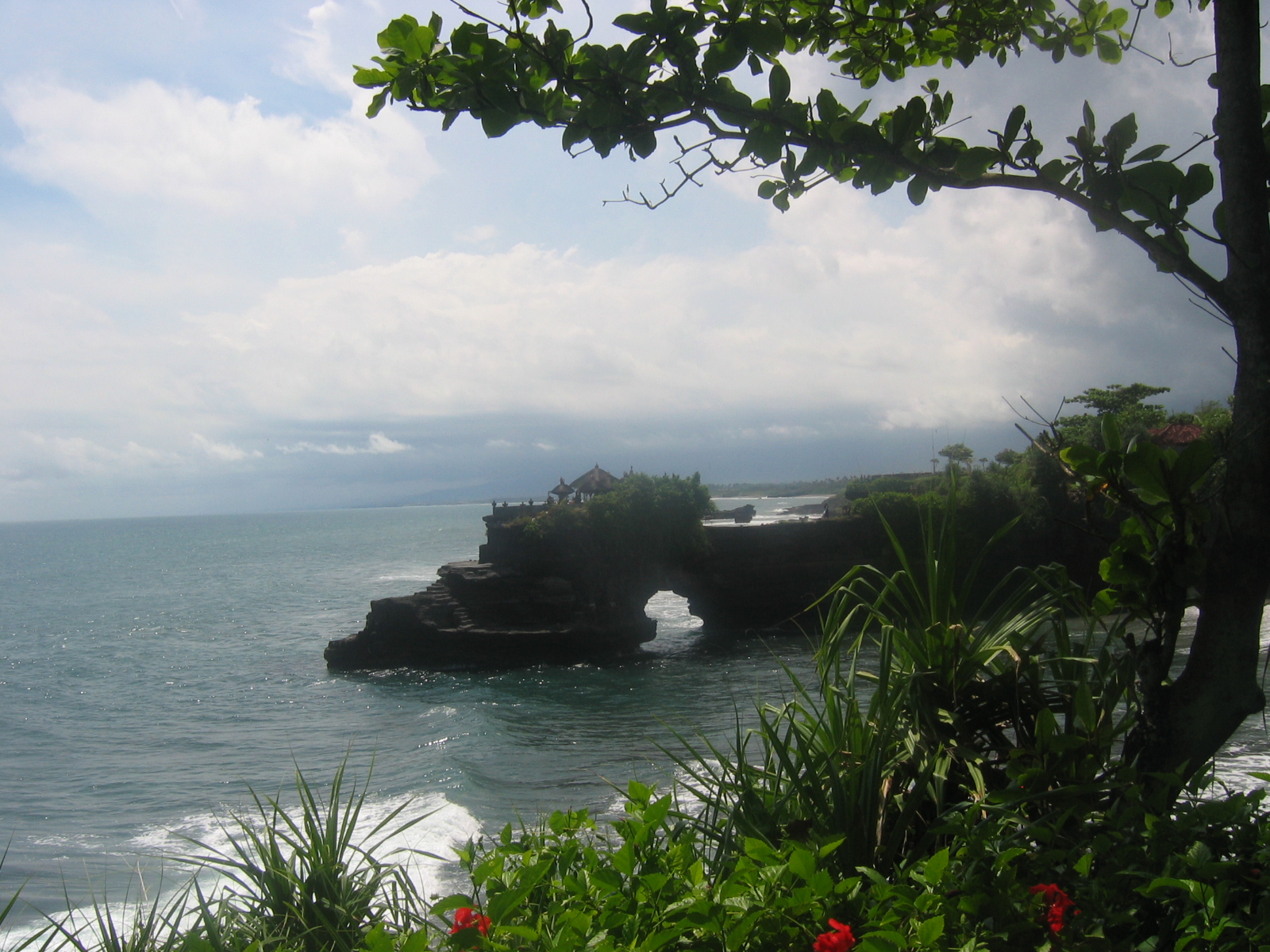 For example, scattered around the island are special, highly traditional villages called “Bali Aga,” where these beliefs about time underlie the whole social and economic structure of the village. In Bali Aga villages, it is believed the villagers are always reborn into the same village, unless they commit some great crime for which they are exiled. The village is therefore in a sense eternal: just as the land and the buildings and temples are always there, so the villagers, after a short spell in heaven as “ancestors,” return to their place to be reborn. People are in this sense precisely like rice or other crops, they say: after harvesting, they are replanted.

The village is self-governed by a strict gerontocracy. Upon marriage, a young couple sits at the seaward end of a long ceremonial seating platform. They are given a plot of farmland and a house by the collectivity. After about ten years, as other young couples join the village after them and take their seats behind them, the land is redistributed. As one gets older, one’s land gets better and one’s seat moves up the hierarchy. Each seat or group of seats has a particular title and functions attached to it, from “butchers” at the lower end to “village heads” at the upper. The formal heads of the village are the two oldest married couples. All major decisions are made by the entire community of marriage villagers, led by the elders.

In such a system, one’s age in absolute terms is almost a meaningless concept, since each person has lived through the entire cycle of statuses from “newborn” to “elder village head” to “ancestor spirit” and back to “child” many times. On the other hand, one’s relative age (relative to the other villagers) determines one entire social position. The names used in these villages reflect this attitude: at birth children are given a birth-order title (e.g. “firstborn”) and a personal name, which can be changed like a nickname. On having a first child, a parent is renamed teknonymously, e.g. “Father of X” or “Mother of X.” Grandparenthood brings a new title, “Grandparenthood brings a new title, “Grandparent of Y.” Greater age also brings public titles, so that a village elder out to be addressed as the equivalent of “sir” and his or her personal name is forgotten. What Clifford Geertz has called “genealogical amnesia” occurs after a person’s death: it it considered disrespectful to remember the personal names of ancestors, so that as one becomes older one’s identity simply merges into the generalized one of “ancestor,” later to become “child” or “first-born” once again.

In these villages, social order is in effect created by the order Time is presumed to follow: that of slow and predictable changes. Since Claude Lévi-Strauss, many anthropologists have discovered instances where societies find a pattern in the order of Nature: the totemic clans of Australian of Nature American cultures, for example. The Bali Aga, however, find such a pattern in time itself. For each citizen of the Bali Aga village, the passage of time will bring him inexorably through all that stations of village office, and provide him with all that the village has to give. The structure of Time is the model, and basis, for social order.

Today the Bali Aga are only a small minority of Balinese villages, but many vestiges of the Bali Aga preoccupation with time-cycles as this sort of basis persist in more modern villages.

A vivid example of this preoccupation is provided by the archaeologist W.F. Stutterheim, who in the 1925 began the first systematic exploration of archaeological sties on Bali. In a book about the results of this survey, Stutterheim describes an incident that occurred while he was investigating a tenth-century shrine:

Not far from [Tampak Siring], which has acquired a certain fame among tourists owing to the so-called “kings’ tombs” situated there, lies the already mentioned very holy watering place Tirta Mpul. Exploring the vicinity, I found a short distance away, in a village named Manukaya, a much weather-worn inscription on a stone. None of the Balinese could decipher the old engraved letters, nor were the contents of the inscription known to anyone. The stone stood there, as every villager of Manukaya knew it from childhood, wrapped in a white cloth and provided with the regular offerings. I was told, however, that on the fourth month of every year, at full moon, this stone (which is also said to have fallen from the sky) is carried to the holy waters of Tirta Mpul and bathed therein—much to the detriment of the stone, by the way, which is a big slab of soft grey tuff covered as usual with a thin layer of cement. Deciphering the inscription, I found that it was none other than the charter of Tirta Mpul’s foundation, made in the fourth month, at full-moon day, in the year 962 A.D. Thus the people have kept alive the connection between stone and watering place for almost one thousand years, and have always celebrated its anniversary ceremony on the correct day; but of the true meaning of this connection every recollection was lost. I need hardly add that the communication of my findings was received in the place with little interest.

The experience of aging is universal, but the meaning of that experience is linked to concepts of time, self, and, in the Balinese case, Nature itself. I have only been able to hint at some of the ways Balinese theories of time are applied to their understanding of self. But it would seem somehow unfair to end without addressing the question, how does it feel to grow old in Bali? Do their theories of time really affect how old people feel?

In August of 1979 I took an anthropologist-friend to a Balinese temple festival—the first time for her, perhaps the hundredth time for me. There are on the order of twenty thousand temples on Bali, all of which have festivals on particular cycles of their own, like the stone of Tirta Mpul in Stutterheim’s story. On the occasions the gods descend to the worshipped and entertained. Among the many sorts of performances held are dances—some performed by a few skilled dancers, others involving the whole congregation. Watching the lines of women dancing classical rejang (an offering dance) in age files, led by the oldest who danced so close to the altars of the gods they could touch them, my friend exclaimed, “They move as if no one ever told them they were old.”
1 September, 2020