A life, filled with happiness and satisfaction - Happiness Academy
Subscribe for our newsletter and get a free e-book! 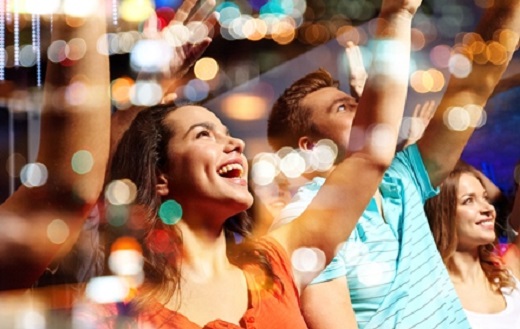 16 December, 2017
There are many intriguing questions that peak our curiosity at different times, such as why the Germans called the perfume that created "eau de cologne" instead of "wasser de cologne" or why ice cream is more popular in cold countries than warm? But out of all those questions, there is one which is constantly taking up the attention of Professor Raj Raghunathan from the McCombs Business School at the University of Austin, Texas and, mine as his business partner for Bulgaria, namely: why smart and successful people - those with good education and a good profession / high position (of course good income - for example, over 4-5,000 leva per month) - in most cases are not as happy as they ought to be? It has been proven that good education and high income are not enough to be happy. Sonya Lubomirski, the author of the bestseller, The Way to Happiness [1], reveals that the circumstances of our lives - such as education, marital status, wealth -affect only 10% of our happiness level. Our genetic footprint is 50% and the remaining 40% is determined by our conscious activity (values, habits, actions, etc.).

So why are smart and successful people not as happy as they could or should be?

Finding the right answer to this question takes a long time, which we could save by reading Raj Raghunathan's book, "You are smart, successful, but are you happy?" [2]. Here I will try to offer you an abridged version of the answers that Raj reveals in detail in his book.

Let's start with the things we need as humans to be happy. The first is the need for our basic necessities to be satisfied - i.e. not to be hungry and to have shelter. As you can guess - we cannot talk happily if those needs are not satisfied. But as we know - for the smart and the successful - this is not a problem, so let's focus on other people's needs.

The second necessary thing is the need for proximity - or as some psychologists call it - the sense of belonging. This need is determined by the demand to build a close relationship with at least one person. But how important is the need for proximity to our happiness? In a study conducted among the top 10 percent of the happiest people, the researchers found that each of them had at least one close relationship. So, if you want to be one of the happiest people - accept that proximity to other people is not a luxury but a necessity. Other scientific studies, which are a continuation of what has already been mentioned, prove that the opposite of closeness - loneliness - is the cause of many physiological problems (overweight and high blood), so it can lead us to mental problems (such as depression and insomnia).

The third important need for us is based on our need to achieve results - some psychologists call this a quest for mastery (competence). We need to feel very good at something - such as writing, drawing, running, managing finance, and so on.

The fourth, last determinant of happiness is the need for autonomy - the sense that we are not dependent on someone else's control. This is also the reason why we as human beings do not suffer situations in which we cannot act according to our own desires. That is why we are also making the so-called "Reactive resistance" (this is a term that psychologists use for the desire to do things that are forbidden). Reactive resistance, like our inherent human response, explains why over-control of others is not a good idea. The need for autonomy - as well as the needs for connectivity and competence - are deeply rooted in our country, which is why they have been present in our country since early childhood. For example, if you are trying to control your children to write their homework, you may be greeted with snorting or other rebellion. And if children react so, imagine how the people in your team feel when they are under constant control (even if they are adults and manage to control their reaction, in most cases the feeling of inner discontent is a fact you just do not see).

That's why it's good to remember that in relationships - you can either control others or they can love you, but not both.

Most people are well aware of the importance of these 3 needs - from proximity (connectivity), mastery (competence) and autonomy - to happiness, and that our actions can be explained as an attempt to satisfy one of these needs. But for our happiness, it is not only important that these needs be met, but also the ways in which we achieve this satisfaction.

There are two paths to mastery (competence): the pursuit of superiority or the search for optimal experience (flow). There are two ways to the nearness: the desperate need for love and the need to love (and give). In the case of autonomy, the two paths are a need for external control (the desire to control people and events) and the need for internal control (the desire to control and regulate our own reactions to others and external circumstances). 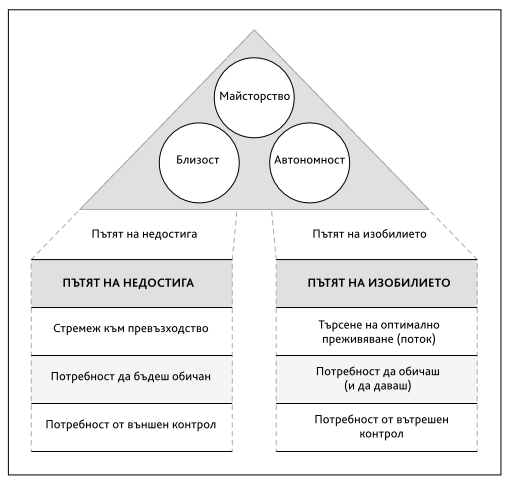 The word "shortage" captures an important element common to all three directions on the first time. A person who seeks superiority to others believes that life is a win-win game. This man believes that the wealth (wealth, power, glory, etc.) he needs to be happy is in short supply and therefore seeks supremacy over others. If he did not perceive these goods as limited, but believed they were abundantly available, he would not have been so motivated to seek superiority over others. Similarly, the person who desperately seeks the love of others believes that the cup of love is not full - or at least not full enough - and therefore does not feel complete and needs someone else to supplement him. He can also live with the feeling that there is nothing of value to offer to others - and this can cause clapping or avoidance. This kind of self-acceptance - "I'm not worthy", "I'm not whole," and so on - is strongly related to the issue of scarcity. Over-control over others and the results also stem from the deficiency orientation. More precisely, the search for over-control stems from the understanding that we do not get enough of the other's respect, love, or trust, or that we have not received enough "desirable" results. That is, the tendency towards over-control comes from the understanding that if we do not have to overwhelm the others or the situation, the desired results will probably not be obtained, and in this sense, it is related to the notion that the possibilities for achieving the desired results are limited.

And here come the "fatal sins" to happiness - the pursuit of superiority, clinging or avoiding, and being over-controlling - and they all originate from the orientation to deficiency.

On the contrary, the three alternative paths originate from the orientation to abundance. Just when a person has the feeling that they have adequately taken care of him, he is much more inclined to look for something just because of the pleasure he or she feels from this (stream) [3] than for external prizes. Similarly, when a person has a sense of abundance - like a king or queen - he is truly capable of generosity. Similarly, when a person has a sense of abundance in terms of the certainty of dealing with everything his life offers, he feels comfortable to abandon external control and instead seek internal control.

Let's go back to the theory of Sonya Lyubomirski, which scientifically proves that wealth and achievements can make the smart and successful with no more than 10% happier than the rest. Half (50%) of our happiness level is genetically set, and the remaining 40% depend on the path we chose to follow - shortage or abundance.

And the longer we move on the path of deficiency and refuse to accept the possibility of changing our attitudes and going down the path of abundance, the more we move away from happiness.

[2] The book is on the Bulgarian market at the beginning of December, published by Crystal Water.

[3] B.a. Mihai Chiksentimihai, "Stream - Psychology of the Optimal Experience", Hermes Publishing House, 2016. The famous psychologist Mihai Chinxenmihai introduces the concept of flow - thus calling an optimal experience that so absorbs your attention that you lose a sense of time. For the first time, the psychologist documented this phenomenon in the 1970s

Let us put things into perspective

Spirituality as a Character Strength

Workshop to share innovative practices for working with young people

STRESS-LESS - Online program for prevention of digital stress at work

Do your employees have the tools and methods to handle digital stress?

September - the month of Perseverance

Happiness at wok - an interview with prof. Raj Raghunathan

Welcome to the COPE Project!

Start of the Need to Connect project!

Try to be a little kinder

Prudence as a Character Strength

December - the month of Humility

Hope as a Character Strength

Workshop: Happiness recipe during and after pandemic

Study on digital stress on the workplace